A Bichon Frise/Jack Russell cross called Teddy had to be helped out by both vets and the fire brigade after he got his toes hopelessly stuck into the metal cover of a plughole.

Owner Kristi, from Bridgend, had just finished giving Teddy a bath when the freak accident occurred. Unable to free her pet, Kristi rang the fire brigade for help.

Kristi said, “It had been raining and Teddy had been in the garden rolling in the mud, so needed a bath. He’s very pampered an loves a bath followed by a brush and blow dry.

“While I was rubbing his tummy to make sure the shampoo was off, he slipped backwards, which he’s never done before, and his foot went into the plughole. He was so frightened and sat shaking with a towel around him while we tried to get him released, and our brand new bath had to be taken apart.”

Firemen were able to get the plug cover out of the hole, but Teddy’s toes remained firmly stuck in it – and so it was time for an emergency trip to the vet’s. 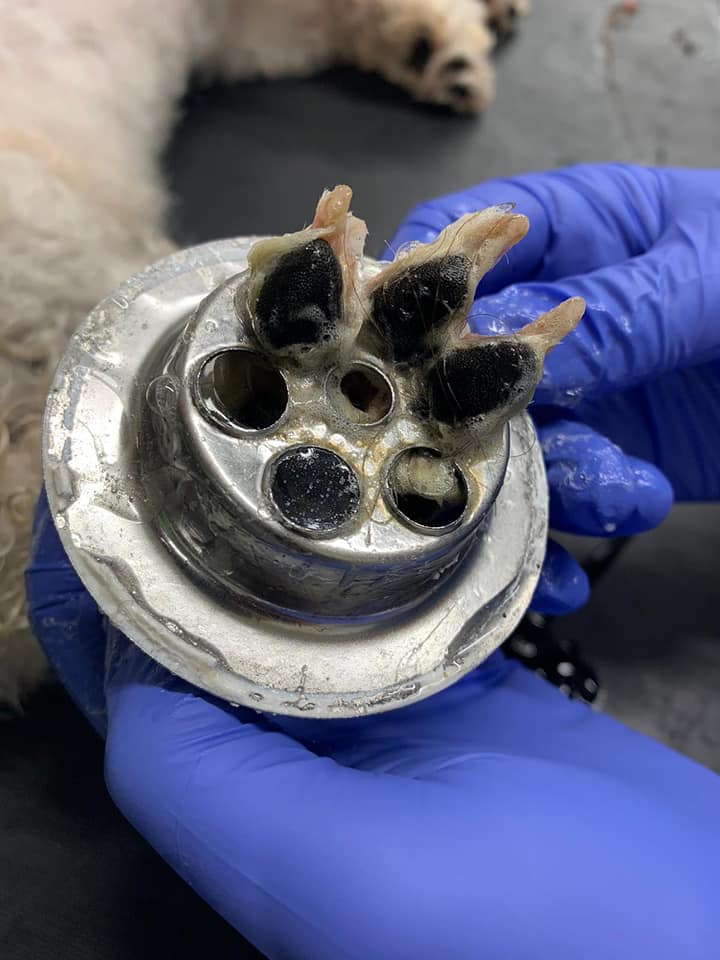 Kristi rushed her dog to Maes Glas Vets in Bridgend, where he was sedated before vet Caitlin Owen, assisted by veterinary nurse Rachel Cawley and animal care assistant Melody Galliers, began the painstaking work to free him without damaging his toes, which had swollen up.

It took three hours, but they were finally able to pry Teddy’s toes free. Caitlin said, “I’d never seen anything like this before and this is definitely the most unusual case I’ve ever seen.

“It took a long time so we didn’t hurt him or damage his toe, but he was very sweet and very well behaved. The plughole cover was wedged over his joints and his toes had swollen up so very sore and difficult to remove.

“We had to use metal cutters to make the hole bigger to get his toes back through.”

After ensuring nothing was broken, the staff proceeded to bandage Teddy’s toes, which had a few cuts. A couple of days later, Teddy returned to have the bandages removed.

Kristi added, “The vets wee amazing and did so well to remove the metal cover. You would think nothing had ever happened as he is back to jumping on the sofa and running around the garden.”