Golden Retriever saved by lifeguards after swimming to group of seals

On the afternoon of Saturday 3 July, Rosa the Golden Retriever was enjoying a day on the beach when she noticed a group of seals and decided to reach them – but she swam much too far out at sea in the process, and lifeguards had to guide her back to shore.

RNLI lifeguards at Sea Palling were alerted by a member of the public of the dangerous situation Rosa was in, and they immediately entered the water to rescue her as lifeguard Tom Owen stayed on the beach to continue monitoring the area.

Lifeguards Rebecca Cooper and Greta Balfour paddled out on rescue boards, and Rosa was so focused on the seals she was trying to reach, manoeuvring her back to shore posed a challenge. Eventually Rosa, still full of energy, was happy to swim alongside rescue boats back to shore. 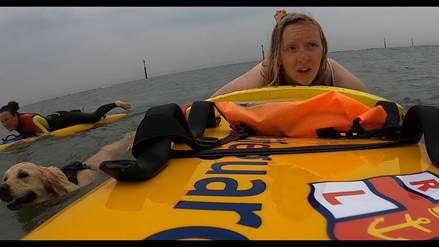 After the Sea Palling RNLI team ensured that she had not taken in too much water, the adventurous retriever was reunited with her owner, whom lifeguard Rebecca Cooper congratulated for staying calm and not entering the water to try rescue his pet on his own.

“Although Rosa was stuck out at sea, it was great that her owner stayed calm and dialled 999 for the Coastguard,” she said. “The RNLI rescue animals to ensure that the public don’t put themselves in danger by trying to do so. Rosa’s owner’s level-headedness meant that we could bring her dog back safely.”

RNLI advises, “If your pet goes into the water or gets stuck in mud, don’t go after it. Move to a place you can get to safely and call its name. If you think your pet is in danger, call 999 or 112 and ask for the Coastguard.”